Born in Landau, Bavaria, Glas started appearing in films as early as 1965. Her breakthrough role was that of Barbara in the unconventional Zur Sache, Schätzchen (Go for It, Baby) 1968, which captured the spirit of the times in that it presented youthful protest against the German Establishment and hinted at the loosening of morals in the wake of the Sexual Revolution. — Wikipedia

As seems to be the case with many successful European actresses of the time, Uschi also ventured into the recording studio. And, as also seems to be typical, she didn't find the same popularity there. Her Giorgio Moroder-produced cover of Edison Lighthouse's 'Love Grows (Where My Rosemary Goes)' as 'Wenn dein Herz brennt' ('When Your Heart Burns' (?) ) was her biggest hit - but still only achieved modest success, according to this page on Uschi at the Schlager Stars website.

Here's a scan of her from a 60s German mag and the blurb that accompanies it: 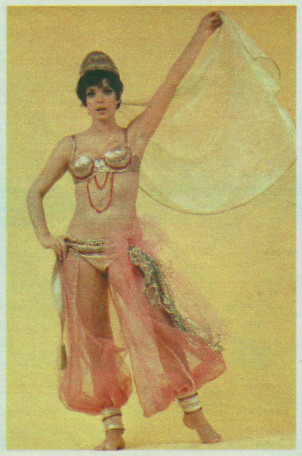 "Uschi is a saucy Harem girl of a different kind: "I don't want a ruler, I'd rather a Harem full of men - naturally only for Fasching [carnival season]." (That was my best attempt to translate - please help me refine/correct it, German-speakers!)

Some more pics of the groovy-lookin' Fräulein:

Links: Vintage magazines feat. Uschi on Ebay, Uschi @ IMDB, some pics at Starclub Hamburg (all stamped, but worth a look).
Leave a comment if you have any good links to share.
Buy: Pop In Germany, Vol. 6, Uschi 7"s on Ebay