My last.fm friend Aaron wrote an excellent piece for mercurialsound.com on the early use of distorted guitar in Françoise Hardy's 'Je n'attends plus personne'. The site has been down for ages, but he's kindly given me permission to print it here in full. 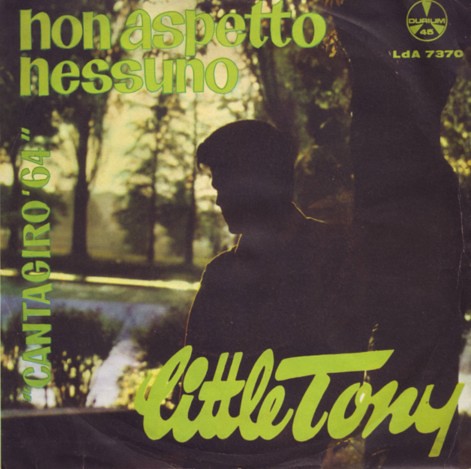 Françoise's track is actually a cover of a hit by 60s Italian rock star Antonio Ciacci, who went by the name of Little Tony. This version is certainly lighter on the fuzz, but you can detect a single distorted note as the lead beat in each bar of the intro, which melds with the bassline to create what serves as a fairly heavy intro. However, it's still not as heavy a sound as you hear on Françoise's cover, nor the same application of distortion, so credit still goes to the makers of her track for being ahead of their time. But the original does stand out as having a heavier guitar sound than typical European pop of the time and combined with Little Tony's strong vocals, makes quite an impact. It makes me wonder whether this is what inspired the creators of 'Je n'attends...' to chunk up the guitar even more, to get a little of the more of the aggressive effect that Françoise's vocals can't convey.

You can find 'Je N'attends Plus Personne' on CD on Mon Amie La Rose or The Vogue Years, or keep an eye out for the original EP on Ebay (e.g. here).

Previously, only last week, I had only thought of Françoise Hardy as the catchiest pop act of the 1960s, yes, even more than The Beatles, Os Mutantes, or whatever. Tracks like "Oh, Oh Cheri", "Je Suis d'Accord", and my personal favorite "Le Temps De L'Amour" are essentially etched into my consciousness from nonstop repeat listening. The immaculately cool pop recordings I just listed along with grandiose, breathy sophistication of La Question have quickly become all-time favorites from the mixture of Hardy's detached singing and her ability to write tireless hooks (she wrote her own songs before pretty much anyone). But then I heard, by chance, "Je N'Attends Plus Personne" off of her 1964 Mon Amie La Rose album (which I'd never heard, though I'm quite familiar with the title track of course, a floating melody rivaling "Candy Says" in pure tranquility) on shuffle, and I was mystified. A "WTF" moment indeed.

The "WTF" moment is a rare occurrence for me. It's either happened when I hear something completely "out there", for instance the first time I heard Miles Davis' Bitches Brew or Slint's Spiderland, or when I hear something that is utterly what I needed to hear at that time (Elliott Smith's Either/Or). But this was something else; it momentarily completely destroyed any notion I had of musical history as I stared dumbly at my computer screen.

The idea of "heavy" and distortion of non-avant-garde guitar is of course from Link Wray's seminal "Rumble", but it's introduction into the pop scene, and as a link into heavy metal and punk, is often divided into several answers. A few common responses are The Kinks' "You Really Got Me" (Kinks, 1964), The Sonics' "The Witch" (Here are the Sonics!!!, 1965), or The Troggs' "Wild Thing" (From Nowhere, 1966). I would have somewhat agreed with the first two (1966 is a bit late for me, I mean John and Lou had put down the acoustic by then, right?), but I'm almost certain now the answer lies in "Je N'Attends Plus Personne".

Wait, wait, wait. Françoise Hardy? The chanteuse who wrote relatively light sounding pop songs like "Tous Les Garçons et Les Filles" did the heaviest song of the first half of the 60s?

"Je N'Attends Plus Personne"'s opening salvo, 12 seconds of pure distorted guitar extinguishes any question of who deserves the credit, even if she did it the same year as The Kinks or a year after The Wailers. The point is she (well, the session guitarist) did it so much better that it's ridiculous even to compare them. Imagine the tone Lou Reed used on his 2000 album, Ecstasy, or what Neil Young pulled out of his bag when he was in a rock and roll mood. I'm talking CHUNKY riffs; in fact this is the basic definition of that oft used term, droning heavy distortion. The riff on "You Really Got Me" sounds like something The Byrds would play on their Rickenbackers in comparison. Most definitely the heaviest pop music until Lou Reed got all Ornette Coleman around 1966.

Whether or not it's the first punk song is irrelevant. Punk originally wasn't a sound (listen to Marquee Moon and the first Suicide album back to back, and tell me they sound alike, or deny they're punk), and that attitude can be found much earlier (Yoko Ono, Ornette Coleman, William Burroughs, and John Cage anyone?). But as a precursor to what is commonly known as the punk sound today, the Ramones/77 abrasive guitar, it's damn close, though it isn't as fast. It obviously isn't the first heavy metal or garage rock song, so I won't bother with tackling that nonsense.

Oh, the rest of the song? Classic Françoise Hardy. Acoustic guitar drifts through the distorted haze (it almost points towards shoegaze how the guitarist uses that drone), epic backing vocals, there's a sloppy guitar solo that's far ahead of what any blues aping guitarists were doing, and of course Françoise's disaffected vocals projecting a hipster chic that again, was only surpassed by Lou Reed and The Velvet Underground two years later. The scope of this song, and really most of hers, far surpasses anything Phil Spector was doing, and really only bettered in 1966, when The Beatles and Brian Wilson forever changed studio art.

The point of this piece? Really nothing but an observation. If you're interested in great, unheralded pop music full of surprises, go grab a compilation of her 60s singles, or her debut Tous Les Garçons et Les Filles (the US release is titled Yeh-Yeh Girl From Paris), and you'll be hooked. Hardy was so far ahead of her time in so many ways, and really much too unappreciated.